Inflation Remains Elevated at 8.3% | Schaftlein Report
—————-
Guest: Jerry Bowyer – Economist, Journalist, Author of multiple books including The Maker Versus the Takers, Founder of the Allegheny Institute
Topics:
1) 8.3% was above the estimate of 8.1% and slightly below the 8.5% in March. We’ll explain further how we as a country got to this point. In a Press Conference, Biden blamed Supply chain problems, Putin and a truly ridiculous statement blaming Republicans even though his policy contributed mightily. With Democrats controlling all three branches of government, the American people are placing blame squarely at Biden and his policies
2) The Core CPI excluding food and energy came in at 6.2%
a. Shelter is up the most since 1991
b. Inflation adjusted earnings fell 2.6% (wage spiral risk?)
c. Energy is up 30%, food up 9% and housing up 5% and likely higher over the past year
d. The middle class and lower income people are getting hurt badly by these higher cost of living increases
3) The Federal Reserve pledges rate increases to get inflation back to 2%. We’ll provide analysis as to why the Fed has failed in its core mission as Jerry and I have discussed for months
4) The 10 year Treasury is above 3%
5) Adjustable rate mortgages are now at 11% of all loans and 19% of the dollar amount
6) Student loan debt is now at $1.59T including new loans and accrued interest
*Total household debt now at $16T
7) House passes a $40B Ukraine aid package (368-57). Senate expected to follow
*Military (arms, training and U. S. personnel) and economic assistance plus $5B for anticipated food shortages
**Total Ukraine support nears $54B
8) Biden approval at 39% in IBD/Tipp poll. Lowest since February at 38% 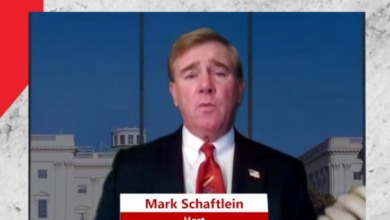 May 9, 2022
Check Also
Close
Subscribe to The Schaftlein Report Newsletter

Senior Engineer Admits Twitter Does NOT Believe In Free Speech In New Veritas Video: ‘We Are All Commie As F*ck’ (Video)
Conservative Firing Line

*NEW* ALERT: It’s Time To Stock Up On THIS Immediately- It’s About To Get BAD FAST
America's Freedom Fighters